Creator of the Natural Strategy Method

I’ve been planning a U.S. election recap for some time – to make sense of and find lessons in what has been an unusually tumultuous political campaign and larger period of cultural division in my nation.

In many ways, these are undeniably the best of times, with startling technological and social advances in the U.S. and around the world. At the same time, our era also can be understood as the worst of times for some, with many still left behind or otherwise feeling alienated by the new opportunities of our rapidly emerging, but naturally disruptive, global society.

Based on many weeks of polling data, my original idea was to warn U.S. progressives that they were lucky to have won a third presidential term, given an obvious gap in their programs and priorities, and to thank Mr. Trump for making this abundantly clear. But as we all now know, luck and the polls did not hold.

And yet, my principal takeaway from the U.S. election and primary lesson for progressives, across the developed world and beyond, is unchanged. Indeed, Ms. Clinton’s unpredicted but not completely unforeseeable defeat is consistent with other recent populist or anti-establishment votes, in Europe and elsewhere.

Our rising populism, in turn, is a natural and recurring consequence of increasing economic inequality, social stratification, and cultural infringement, all of which are strong trends around the world today. And while populism may be a blunt or imprecise social force, it is an understandable, important, and addressable one too. In particular, current outbreaks of disquiet and opposition to established power and order have clear and instructive parallels with other populist periods in Western history (including the 1890s and 1930s).

Today, in substantial parts of both the U.S. and Europe, there is now a large minority of people who have been inattentively missed, comparatively disadvantaged, or directly harmed by the last four decades of information age expansion and prosperity, by rising globalization and multiculturalism, and by our generally impactful but sometimes narrowly-focused progressive reforms and policies. The presence and natural importance of this large but often systematically overlooked minority group – and the group that is primarily driving popular rebellion in the developed world – is the lesson I want to offer to U.S. progressives, their European counterparts, and others seeking progressive change in their nations and around the world.

END_OF_DOCUMENT_TOKEN_TO_BE_REPLACED 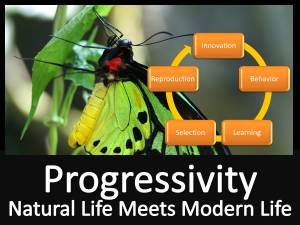 The Quiz: How Naturally Progressive Are You?